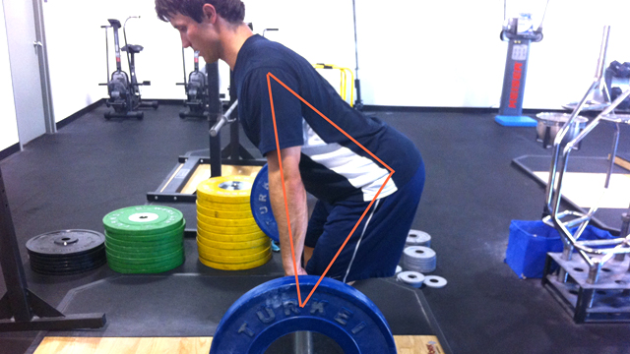 BY: JC Moreau, Founder/Director of Sports Performance, Strength U

I would like to speak briefly about the snatch pull from a hang, and why this is my number one choice for lifts that develop speed and power while being relatively safe and easy to teach.  The full Olympic Snatch involves pulling the bar from the floor to above the head with arms extended, in one motion.  Now this lift involves far more than the description lets on, but because of it’s purpose (to pull the bar directly overhead without a press) it is usually used with less weight than a clean, but is also able to generate greater bar speed!  When performing a snatch pull from hang the athlete is NOT catching or racking the weight overhead, rather simply explosively driving the legs vertically, followed by a vertical pull to roughly chest height.  Additionally, those of you who know me realize that I am not a huge proponent of youth and high school athletes pulling from the floor due to the typical lack of supervision that exists in most of the areas that these athletes train.  When performed from the “Hang” position the bar is lowered to just above the knees in a manner that closely mimics to lowering phase of an RDL, something most trainees are familiar with, and is immediately followed by an aggressive and explosive vertical drive.  It is helpful for most athletes to understand how this and a vertical jump are nearly identical movements (more details on this below)!  Although this does NOT eliminate the risk for injury, it has significantly less potential for technical errors and is easier for most athletes to grasp and perform.

Without getting into the physics of it all there are benefits to increasing bar speed with less weight, as well as benefits to increasing weight (load) while decreasing bar speed.  If Power = Force x Velocity or Power = Force x Distance/Time, in both cases Force is the result of bar speed and load, so that F=MA.  Knowing this, with the clean the M tends to be larger and in the case of the snatch the A variable is greater.  Since We are discussing speed development and acceleration it stands to reason that the snatch offers the greater training stimulus as it forces, and allows, the lifter to move the bar with greater velocity.  However, what I like even more about the snatch pull from a hang is that the snatch grip (which is wider than that of the clean) puts the body in a good flexed position and really allows the lifter to feel the contraction of their scaps (shoulders back/chest out) as they strive to maintain great posture and a flat back.  Also, by naturally putting the lifter in a slightly more flexed position at the bottom it allows for slightly greater ROM from the hips compared to a clean and since the bar is not travelling as far in a pull the added flex has two benefits.

First, it creates an additional few inches for the bar to travel, but second, and more importantly it gets the athlete in a position that really mimics that of the hip and knee flex required in most sports.  With the exception of down linemen in football and sprinters starting out of the blocks, it is rare that an athletes requires much more depth prior to an explosive hip extension (Jump, first step, tackle, dive etc…).  I could go on, but would like to try my best to keep this brief.

With the snatch pull from hang the athlete needs to focus (as they do on all Olympic lifts) on exploding up, keeping the bar travelling in a linear fashion and doing almost all of the work with the legs, glutes and hips similar to a vertical jump, all while maintaining rock solid posture with the torso.  Be sure to emphasize getting vertical and the pull with the arms should be minimal, but must go straight up to avoid pulling backwards, which is a common mistake and can injure the lower back quickly if not addressed.  This can often be created by teaching your athlete to roll their wrists forward “over the bar”.  In this position the elbows stay in front of the body, and the bar travelling up and not backwards.

An additional benefit to this movement is that there is no need to spend the significant time required to teach the catch, making the snatch pull from hang safer and easier to learn for less developed athletes who may not want to be pulling weight overhead, especially in an explosive manner.

In concluding, it is always critical to remember to focus on the purpose of this movement, which is to generate bar speed!  This is an explosive movement and with countless new forms of technology it is possible to measure bar speed, but one that is quite inexpensive in the Coach’s Eye app, which for $4.99 allows for a in-app purchase that allows the user to measure the time required for the bar to travel from point A to point B.  Although this is not as exact as other units which cost from several hundred to several thousand dollars, it does provide the coach with a solid tool to track progress within a workout, from rep to rep and set to set.

For more information, or to send questions or comments please contact Coach Moreau at jc@TheStrengthU.com or visit www.thestrengthu.com.