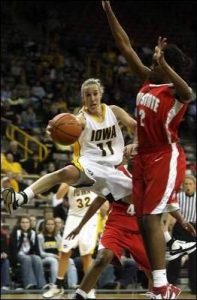 By: JC Moreau, Director of Sports Performance/Founder –  Strength U®

15 years of training men’s and women’s basketball players, from Junior H.S. through the professional ranks will teach you things. One of the many things it has taught me is that certain training protocols have clearly had the greatest positive impact on the performance and health of these athletes. The more I read about self-proclaimed “basketball-specific” trainers or methods, the more I am reminded of what these athletes really need. And it’s not the latest gimmick, but the basic principles of sound performance-development.

Despite the various ways we can define “sound performance training principles”, my experience has shown that proper movement, structural balance and postural integrity are king. And the progressive overload of fundamental strength movements are still the ideal way to accomplish this.

For the purpose of this article, I will not present specific exercises for each category, but instead I will discuss more general movements as well as several key exercises that are paramount in the development of each young basketball athlete, both boys and girls.

Our first priority should be to have EVERY athlete screened by a physical therapist or credentialed sports performance coach trained in the principles of movement screening.  Once an athlete is cleared of mobility issues or pain, then it is safe to proceed with some form of resistance training. From my perspective, the best way to maintain or enhance postural integrity is to work on unilateral movements for the upper and lower body and train upper body pulling movements which emphasize the retraction of the shoulder blades, as well as basic bilateral and unilateral leg exercises. All of these must initially be performed in higher rep ranges (8-15) and multiple sets (2-5) with a slow eccentric tempo for most movements (3-4 full seconds). Perfect posture and positions are prioritized while performing ALL movements from warm up to cool down. When this is combined with higher volume and controlled tempo it goes a long way in developing a solid foundation, which includes greatly improved postural integrity.

While there is much debate pertaining to what the “best” leg movements are I prefer the Goblet or Front Squat, Split Squat and unloaded (bodyweight) Single Leg (SL) Squat progressions with my athletes.  The reason has everything to do with developing the performance outcomes I stated earlier.  First, in order to perform a squat of any kind or a split squat the athlete must first be able to move through those ranges of motion with adequate mobility and stability.  If they cannot, they then need to correct this before adding a load (weight) to the movement.  Second, the Goblet or Front Squat requires considerable engagement of the “core”, and minimize the forward lean at the low back making it safer during the introductory phases. When that aspect is combined with a slow tempo, as stated earlier (example: 4 seconds down, 1 second pause at bottom, 1 second up and 1 second pause at top) you also improve the athlete’s postural integrity, as a lack of strength in this area hinders proper form at higher numbers of reps.  Third, the Split Squat is an effective introductory, unilateral, static single leg movement.  The athlete can still use the back leg for balance, but the movement focuses primarily on the front leg, making it work independently from the other.  Additionally, the Split Squat enhances flexibility in the hip flexors and groin, as well as improving balance.

Finally, the Single Leg Squat. This is the one exercise taught from a partial range of motion before progressing to a full one, followed by additional resistance.  The reason for this has to do with the leverages involved in the exercise. The movement is particularly difficult for most athletes and the lack of support from the opposing leg makes proper alignment between the knee, hip and ankle difficult to maintain, particularly while controlling the tempo.  Once an athlete attains proficiency with this movement to a point to, or slightly below parallel, we are able to add resistance with weight vests, weight plates or dumbbells.

It is the implementation of sound performance principles, applied programmatically, that make up the foundation of our basketball training protocols.  Our objective is to produce an athlete who operates from a good base of mobility, demonstrates proper movement patterns and can maintain postural integrity for the duration of a game or practice. Once that has been attained, we know they have developed the strength required to minimize the potential for non-contact injuries, have a far better chance of remaining healthy and can also take their “game” to the next level.

Recently, an AAU Basketball Coach commented on the improved stamina, quickness, explosiveness and body position of his players in their last few tournaments.  When he asked how I had managed to accomplish this with his players my answer seemed to surprise him with its simplicity; “We made sure they could squat and lunge properly and then we got them stronger in those areas.”

We certainly did more than two exercises, but by focusing on proper structural balance and postural integrity, while improving leg strength the players were able to remain in a defensive stance longer and quite simply played the game with better body position for two full halves.  The result was athletes who were in a better position to take a first step, could take a STRONGER (thus FASTER) first step, remain in a strong “box out” stance under the net, jump higher, run faster, stop, breakdown and cut more effectively. And they could do all of this for a much longer duration.

Sure, we perform an equal amount of upper body strength work, including some hoops specific rebounding, grip, passing, pushing and pulling work in the weight room. We also train speed and agility drills, some basketball specific footwork, balance and core work, ball control and other drills. Just like everyone else. But, when asked how to improve basketball performance in players from 10 to 22, my short answer is, “Get them stronger!” 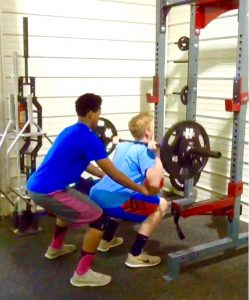 The Squat is one of the most functional movements we perform in sports, and everyday life.  Even though it can be challenging for some taller athletes to squat correctly that is NOT a reason to avoid this movement!