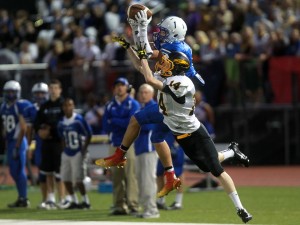 After the 40 yard dash for football, the vertical jump is probably the second most well-known tangible performance score.  In fact, in some ways it may be the most commonly used buy performance coaches as, unlike the “40”, the vertical jump applies to nearly all sports.  over the years I have worked with over 30 different NCAA sponsored Division I sports and can only think of a handful that did not use this test as a baseline measurement for explosive leg and hip power.

An entire book could be written on how the proper strength and conditioning program can maximize an athlete’s speed and explosiveness.  This is simply due to the fact that individuals who gain leg strength and power, maintain bodyweight, or gain only lean mass, and maintain or improve hip mobility will see an increase in their vertical jump.   More specifically, using full range of movement leg exercises, such as squats and lunges, will improve performance for less obvious reasons.  The benefits of performing these movements to near full depth are that they require greater balance, coordination, core and low back strength, mobility, structural balance and athleticism.  However, after years of experimenting with pre-testing variables in an attempt to elicit greater results in the VJ, addressing the lack of hip flexor flexibility that was displayed by 80+% of the athletes I trained, was by far the most consistently effective.

For more years than I care to admit I neglected the hip flexors terribly, both their development and flexibility.  This was a critical oversight for several reasons, since the hip flexors play such a pivotal role in all running and jumping movements.  Additionally tight or weak hip flexors increase the likelihood of injury while decreasing optimal performance.  So why do so many athletes display deficiencies in this region?  I can’t answer that for every athlete and coach, but know that I, and many of my peers, used to be of the belief that if I/we were training the heavy hitters (quads, hammys, glutes), then the supporting cast must be strong as well.  After all how could an athlete who squats 450lbs for 3 reps and hang cleans 300lbs have any weakness regarding hip flexion or extension.  Another possible issue is that the hip flexors are not a singular muscle or even one group, but rather several groups and individual muscles which attach the femur to the pelvis and lumbar spine.  The muscles that make up the hip flexors are :

As you can see the hip flexors are actually comprised of a complex set of muscular groupings with multiple functions, attachments and influences.  Much as we did with our strength work, our flexibility work was often dominated by the major muscles of the leg.  If you can look back to 5, 10 and 15 years ago you may have a hard time recalling stretching anything other then the hamstrings, quads, glutes, groin(adductors) and calf muscles.  As you can see we flirted with the hip flexors by stretching our quads and adductors, but focus was rarely, if ever, placed on stretching the hip flexors exclusively.  Whatever the reason is we have, and many still do, neglect the “front side” when it comes to flexibility and strength.  We always hear about training the posterior chain in the weight room, and on the field or court we do 80-100% of our running straight ahead.  Couple this with how much sitting everyone, including athletes, does and it is no wonder that the hip flexors are tight.  They are constantly in a shortened or contracted position and rarely, if ever stretched or actively lengthened.  Quite simply our lives and training are almost designed to create tightness in this region, so by now you may be asking “how does this impact my vertical jump?”

The reason that improving hip flexor flexibility is so critical in vertical jump performance is that when contracted, or shortened, the hip flexors pull the femur up towards the torso, and when we perform a vertical jump we generate power though our legs and hips and contracted hip flexors will actually decelerate the jumping movement by preventing the powerful hip extensors (glutes and hamstrings) from functioning maximally.  Full hip extension is also vital in maximizing speed through proper running mechanics and essentially all explosive movements from a standing position (that includes most sports and athletic movements)!

So next time you test the vertical jump be sure to perform a very comprehensive series of hip flexor flexibility work.  Internationally acclaimed strength coach, Charles Poliquin, states that as little as five minutes of such stretching these muscles can add 2cm. – 4cm. (.75″ – 1.7″) to the vertical jump, and I do not know of a coach or athlete who would not be thrilled with that tradeoff!  As we have seen there are several reasons to keep the hip flexors strong and limber (year round), but there may not be a movement, exercise or workout that can provide more instant gratification than hip flexor flexibility work.

For more information or with comments please contact JC Moreau at TheStrengthU.com